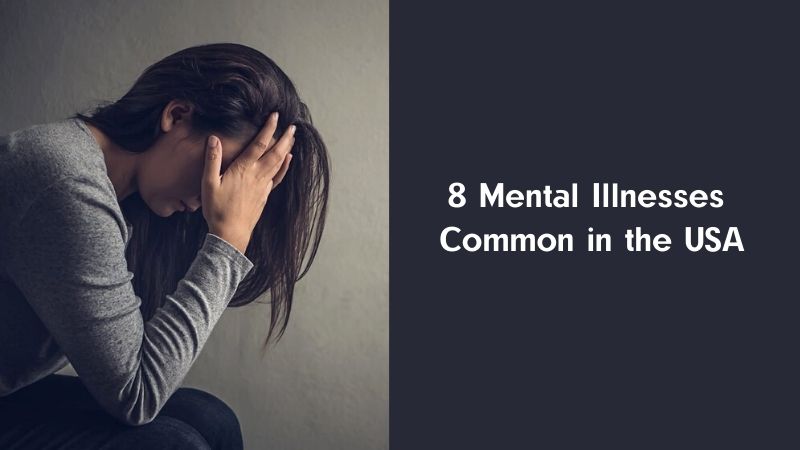 A bad mood or constant fatigue can be signs of a serious illness. According to Working Rite, by the end of 2021, nearly one in five U.S. adults live with a mental illness. And these are only those who officially contacted specialists for help. In fact, this figure may be 4.5 times more. What mental disorders are common in the USA and how to recognize them?

The only way to get rid of this feeling of tension is to avoid situations that trigger it. Therefore, people begin to recheck several times whether the iron is turned off or not, call loved ones more than once a day and find out if everything is okay with them, etc.

Most often it manifests itself through explosive emotions that cannot be controlled. In public places people can still restrain themselves, but among relatives and friends, this control is almost completely lost. And then minor mistakes, such as missing lessons or scattered things, lead to uncontrollable aggression.

Alcohol and drugs are powerful antidepressants and tranquilizers. Initially, these addictions are not so much diseases as ways to relieve stress, lift your mood and fill the inner void. And the deep reason may lie elsewhere.

It is worth distinguishing between “domestic drunkenness” and “alcoholism”. The first is called the method of relaxation, stress relief. There is nothing critical about having a glass of wine with dinner or a glass of beer on Friday night. In this case, only mental dependence on alcohol can form.

But alcoholism is an obsessive craving for a blackout when a person wants to get drunk and forget. At the same time, both physical and mental dependence are formed: alcohol becomes an irreplaceable substance in the biochemical reactions of the body.

This condition is accompanied by irritability and weakness. All forces are spent on resisting oneself. People are trying to cope with the situation, to defend their boundaries through dysphoria (a form of painfully low mood, characterized by gloomy irritability, a feeling of hostility towards others). And then a person can only lie and watch TV.

This mental disorder affects approximately 1.5% of the population. Oddities in thinking, delusional ideas, violation of volitional processes (unwillingness or inability to do something) are considered the most common manifestations of it. In addition, auditory hallucinations are an optional but extremely unfavorable symptom of schizophrenia.

They can be divided into two groups. The first includes dysfunctions (decreased libido, frigidity, impotence, anorgasmia, increased sexual disinhibition, shyness and guilt associated with sexual manifestations, etc.). They often represent symptoms of other mental disorders, such as anxiety and emotional disorders.

The second group includes non-standard sexual desires that the person himself cannot accept. That is, he experiences discomfort from his sexual manifestation (transsexualism, homosexuality, pansexuality, any sexual fantasies, etc.).

Anorexia is a critical weight loss when the body mass index becomes less than 17. A person wants to lose weight more and more, he resorts to extreme diets, laxatives and diuretics. At the same time, important functions of the body gradually begin to turn off. In women, the first manifestation of anorexia is the absence of menstruation. And then other vital organs also fail.

Bulimia is a pathologically (unhealthy) high appetite. Not just being overweight, but compulsive and uncontrollable desire to eat. In severe cases, patients say that the stomach is already bursting with food, but they cannot stop and continue. In this disorder, there is no mental satiety with food. Also, often people with this problem specifically induce vomiting – then bulimia can turn into a state of anorexia.

This is a fairly common manifestation of a mental disorder. It is characterized by certain features:

A person is unable to solve his problems and constantly feels a lack of strength.

We would like to draw special attention to the fact that any mental disorder is only a symptom of deeper mental processes. Emotional, bodily, and mental manifestations are just the tip of the iceberg.

Symptoms can be removed with the help of medications (antipsychotics, antidepressants and tranquilizers). However, they are not always able to solve the problem completely. Or you can understand yourself and improve your quality of life by working with a psychologist or psychotherapist.

Do not self-medicate and self-diagnose. If you have any signs of mental disorders, it is worth contacting a specialist who will provide the necessary psychological support and, if necessary, prescribe medications.